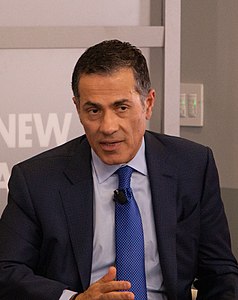 Who is Vali Nasr?

Vali Reza Nasr is one of the leading American experts on the Middle East, a best-selling author, Dean of the Johns Hopkins School of Advanced International Studies in Washington, D.C., Senior Fellow in Foreign Policy at Brookings Institution, and contributor to Bloomberg View.

He taught at the The Fletcher School of Law and Diplomacy of Tufts University, University of San Diego and the Naval Postgraduate School and was a Senior Fellow at the Belfer Center at Harvard University, as well as Stanford University and University of California, San Diego prior to being appointed dean of the Johns Hopkins School of Advanced International Studies in March 2012.

Nasr is a member of the State Department's Foreign Affairs Policy Board and served as senior advisor to the U.S. special representative for Afghanistan and Pakistan, Ambassador Richard Holbrooke, between 2009 and 2011. He is a Life Member of the Council on Foreign Relations.

Vali Nasr is one of America’s leading experts on the Islamic world and Middle East policies. He is internationally renowned and has influenced critical public debates and policy decisions in both the U.S. and Europe. He is the author of the book The Dispensable Nation, which takes a hard look at strategic risk of a shrinking American role on the global stage. His two previous books, Shia Revival and Forces of Fortune correctly foretold of sectarian conflict following the Iraq War and the potential for an Arab Spring. He has testified before the U.S. Senate on issues relating to the Middle East, advised presidents, senior policy makers, and members of the Congress. He has been featured on the front page of the Wall Street Journal, quoted by Senator John Kerry on the floor of the U.S. Senate, and described as a “national resource” by Richard Haass, the President of the Council on Foreign Relations.

Discuss this Vali Nasr biography with the community: