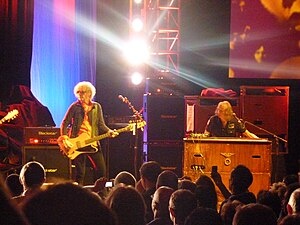 Who is Verden Allen?

Verden Allen is an organ player and founding member of 1970s rock band, Mott the Hoople. Before that band formed, he had in the middle 1960s been in a rhythm and blues cover band called The Inmates and recorded with Jimmy Cliff.

He left Mott after their breakthrough 1972 album, All The Young Dudes, because Hunter was reluctant to record most of the songs he had written. He is featured singing on a few Mott songs, including the demo version of "Nightmare", released on the album Mott, as well as "Soft Ground". Another song of his, "Son of the Wise Ones", was going to be recorded for Mott, but when Allen left he refused to give the song to the remaining members. After he left Mott, he joined up with future Pretenders members James Honeyman-Scott and Martin Chambers in a band called The Cheeks. They disbanded after in 1976 after failing to get a record deal, after which Allen spent the late 1970s and early 1980s in a number of short-lived bands on his own record label, Spinit. From 1983 until 1994, Allen was entirely out of the music business, when he made a low-key comeback with a new band named after one of Mott's earliest songs, Thunderbuck Ram. They released only one album, Long Time No See, before disbanding. On his 1999 solo album, For Each Other, Allen played all the instruments himself and the album was released by Angel Air Records, who reissued all the classic Mott the Hoople albums during the early 2000s.

Discuss this Verden Allen biography with the community: