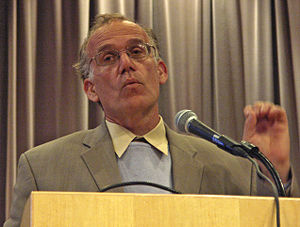 Who is Victor Davis Hanson?

Victor Davis Hanson is an American military historian, columnist, former classics professor, and scholar of ancient warfare. He has been a commentator on modern warfare and contemporary politics for National Review and other media outlets. He was a professor of classics at California State University, Fresno, and is currently the Martin and Illie Anderson Senior Fellow at Stanford University's Hoover Institution.

Hanson was awarded the National Humanities Medal in 2007, the Claremont Institute's Statesmanship Award at its annual Churchill Dinner, and the $250,000 Bradley prize from the Lynde and Harry Bradley Foundation in 2008.

Hanson is also a farmer and a critic of social trends related to farming and agrarianism.

Discuss this Victor Davis Hanson biography with the community: