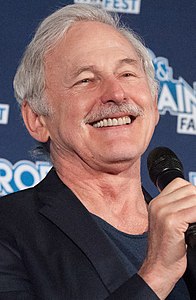 Who is Victor Garber?

Victor Joseph Garber is a Canadian film, stage and television actor and singer. Garber is known for playing Jesus in Godspell, John Wilkes Booth in Assassins, Jack Bristow in the television series Alias, Max in Lend Me a Tenor, Thomas Andrews in James Cameron's Titanic, and as Canadian ambassador to Iran, Ken Taylor, in Argo.

Discuss this Victor Garber biography with the community: