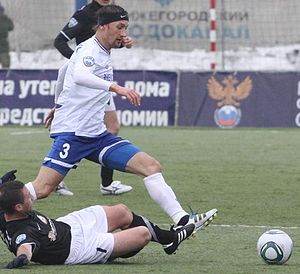 Uladzimir Mihailavich Karytska is a Belarusian footballer. As of 2012 he is playing for Shinnik Yaroslavl. Karytska has become a member of the Belarussian national side in 2002. Karytska did not receive call-ups during most of Bernd Stange's tenure as manager of the Belarus national side, but was nominated for a February 2012 friendly match against Moldova by new head coach Georgi Kondratiev, during which he earned his 40th cap.

Discuss this Uladzimir Karytska biography with the community: