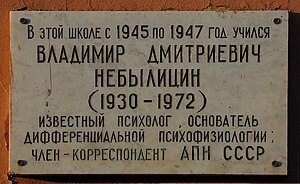 Based on Teplov's researches, he studied problems of experimental neuroscience. He managed to substantiate Teplov's hypothesis of inverse dependency between the strength of the nervous system and sensibility. He described some previously unknown characheristics of the nervous system, such as dynamicism, developed several electro-physiological methods of research of dynamics of brain processes. Nebylitsyn advanced a hypothesis on general characteristics of the nervous system underlying such personal characteristics as activity and self-regulation. In Soviet psychology he was a pioneer of the factor analysis.

He died in an air disaster together with his wife.

Discuss this Vladimir Nebylitsyn biography with the community: