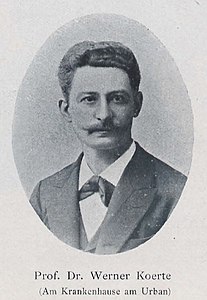 Who was Werner Körte?

Werner Körte was a German surgeon who was a native of Berlin. He was the brother of archaeologist Gustav Körte and philologist Alfred Körte.

During the Franco-Prussian War he worked as a volunteer in a Typhuslazarett in Metz, and in 1875 earned his medical doctorate at the University of Strasbourg. From 1877 to 1879 he was an assistant to Robert Ferdinand Wilms at the Bethanien Hospital in Berlin. When Wilms was incapacitated due to illness, he was provisional head at the hospital. From 1889 to 1924 he was director of the Krankenhaus Urban in Berlin.

As a surgeon, Körte specialized in liver, gall bladder and pancreatic operations. From 1899 until 1929 he served as the first secretary of the Deutschen Gesellschaft für Chirurgie, and was later its president and honorary chairman.

The singer Amalie Joachim died while undergoing a gall bladder operation under his care on February 3, 1899.

Discuss this Werner Körte biography with the community: