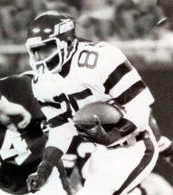 Who is Wesley Walker?

Walker graduated from Carson High School in Carson, California where he set many receiving and return records, and was an All-American at the University of California.

He was noted for his great speed, averaging over 20 yards per reception over many seasons. At the time of his retirement, he was second in Jets all-time receiving yardage. Legally blind in one eye, Walker overcame this handicap to become one of the Jets all-time great receivers.

Walker was one of the dominant players in the 1982 NFL Playoffs: in two postseason games, he caught 15 passes for 314 yards and 2 touchdowns, as the Jets beat the Cincinnati Bengals and the Los Angeles Raiders, both on the road.

His best receiving season came in 1983, when he caught 61 receptions; and in 1986 he had a career-best 12 receiving touchdowns. Four of them were scored in week three, as he caught a game-winning touchdown from the Jets quarterback Ken O'Brien in overtime to give the Jets a wild shootout win 51-45 over the Miami Dolphins.

Discuss this Wesley Walker biography with the community: