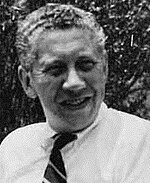 Who was Whitney Ellsworth?

Fredric Whitney Ellsworth was an American comic book editor, and sometime writer and artist for DC Comics during the period known to historians and fans as the Golden Age of Comic Books. He was also DC's "movie studio contact," becoming both a producer and story editor on the TV series The Adventures of Superman.

Discuss this Whitney Ellsworth biography with the community: