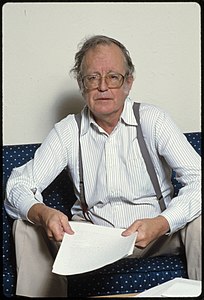 Who was Wilfrid Sheed?

Sheed was born in London to Francis "Frank" Sheed and Mary "Maisie" Ward, prominent Roman Catholic publishers in the United Kingdom and the United States during the mid-20th century. Wilfrid Sheed spent his childhood in both England and the United States before attending Downside School and Lincoln College, Oxford where he earned BA and MA degrees.

Sheed's first novel, A Middle Class Education, was based on his experiences at Oxford. His biography Frank and Maisie was about his parents' literary establishment and intellectual world. He wrote satirical novels about journalism and memoirs in his later years. His book on American popular music, entitled The House that George Built with a little help from Irving, Cole and a Crew of about Fifty was published in 2008.

Garrison Keillor commented in a review of the book:

"Golden Age of American Song has been saluted and high-faluted in books and wept over repeatedly, but “The House That George Built” is a big rich stew of an homage that makes you want to listen to Gershwin and Berlin and Porter and Arlen all over again ... Sheed's jazzy prose is a joy to read. It goes catapulting along, digressing like mad, never pedantic, a little frantic, which is just right: the jazz song, like all true art, is a flight from depression, indifference, the cold blank stare, the earnest clammy touch.

Discuss this Wilfrid Sheed biography with the community: