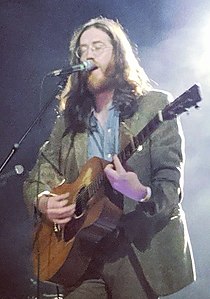 Who is Will Sheff?

Will Sheff is the frontman for the Austin, Texas-based indie band Okkervil River. Originally from Meriden, New Hampshire, he is also a founding member and co-songwriter for Shearwater, another Austin band. Sheff writes and performs many songs as a solo artist while juggling his commitments to Okkervil River and Shearwater, but has released just one single as a solo artist. As well as writing and singing songs, he plays the guitar, the piano, the banjo, and the harmonica.

Sheff has collaborated with The Mendoza Line on the duet "Aspect of an Old Maid" and played piano on the Palaxy Tracks album Cedarland. With Okkervil River, he produced Roky Erickson's 2010 album True Love Cast Out All Evil and provided backing musicianship. He has produced an upcoming album by Brooklyn-based band Bird of Youth along with Phil Palazzolo.

Sheff contributed a large amount of original music writing to the articles section of Audiogalaxy before the service was shut down.

He also recently contributed background vocals to The New Pornographers' 2010 album, Together.

Discuss this Will Sheff biography with the community: