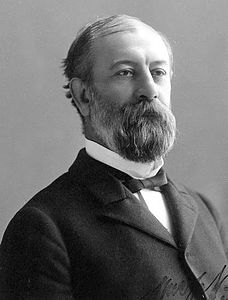 Who was William Freeman Vilas?

William Freeman Vilas was a member of the Democratic Party who served in the United States Senate for the state of Wisconsin from 1891 to 1897. He was a prominent Bourbon Democrat.

Born in Chelsea, Vermont, Vilas moved to Madison, Wisconsin with his family in 1851. His father was Levi Baker Vilas. He graduated from the University of Wisconsin–Madison in 1858, and from the Albany Law School in 1860. He enlisted in the Union Army during the Civil War and was a captain in the 23rd Wisconsin Volunteer Infantry Regiment and later served as the lieutenant colonel of that regiment.

Following the war, Vilas was a Professor of Law at the University of Wisconsin–Madison, and a regent of the University from 1880 to 1885 and 1898 to 1905. Vilas served as a member of the Wisconsin State Assembly in 1885, until he was appointed the Postmaster General between 1885 and 1888, and as Secretary of the Interior from 1888 to 1889, both under President Grover Cleveland.

After leaving the cabinet, he led Wisconsin German Americans in the protest against the Bennett Law of 1889 which required schools to only use the English language. From 1891 until 1897 he was a member of the United States Senate, in which, during President Cleveland's second term, he was recognized as the chief defender of the Administration, and he was especially active in securing the repeal of the silver purchase clause of the Sherman Silver Purchase Act. He was unsuccessful in an 1896 reelection bid, having been defeated by Senator John Coit Spooner.

Discuss this William Freeman Vilas biography with the community: