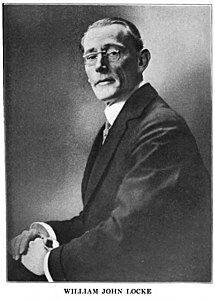 Who was William John Locke?

William John Locke was a novelist and playwright, born in Cunningsbury St George, Christ Church, Demerara, British Guyana on the 20th March 1863, the eldest son of John Locke, Bank Manager of Barbados, and his first wife, Sarah Elizabeth Locke. His parents were English. In 1864 his family moved to Trinidad and Tobago. In 1865, a second son was born, Charlie Alfred Locke, who was eventually to become a doctor. Charlie Locke died in 1904 aged 39. His half-sister, Anna Alexandra Hyde, by his father's second marriage, died in 1898 in childbirth aged 25.

At the age of 3, Locke was sent to England for further education. He remained in England for nine years, before returning to Trinidad to attend prep school with his brother at Queen's Royal College. There, he won an exhibition to enter St John's College, Cambridge. He returned to England in 1881 to attend Cambridge University, where he graduated with honours in Mathematics in 1884, despite his dislike of that 'utterly futile and inhuman subject'.

Discuss this William John Locke biography with the community: