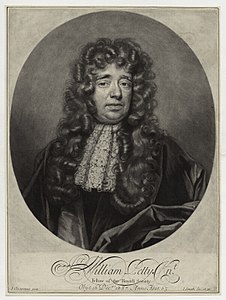 Who was William Petty?

Sir William Petty FRS was an English economist, scientist and philosopher. He first became prominent serving Oliver Cromwell and Commonwealth in Ireland. He developed efficient methods to survey the land that was to be confiscated and given to Cromwell's soldiers. He also managed to remain prominent under King Charles II and King James II, as did many others who had served Cromwell.

He was Member of the Parliament of England briefly and was also a scientist, inventor, and entrepreneur, and was a charter member of the Royal Society. It is for his theories on economics and his methods of political arithmetic that he is best remembered, however, and to him is attributed the philosophy of 'laissez-faire' in relation to government activity. He was knighted in 1661. He was the great-grandfather of Prime Minister William Petty Fitzmaurice, 2nd Earl of Shelburne and 1st Marquess of Lansdowne.

Discuss this William Petty biography with the community: