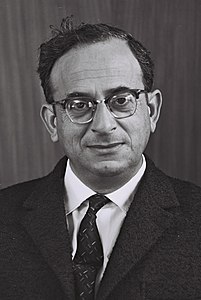 Who is Yitzhak Navon?

Yitzhak Navon is an Israeli politician, diplomat, and author. He served as the fifth President of Israel between 1978 and 1983 as a member of the center-left Alignment party. He was the first Israeli president to be born in Jerusalem, then within the British Mandate for Palestine, while all previous presidents were born in and made aliyah from the Russian Empire.

In 2005, he was voted the 108th-greatest Israeli of all time, in a poll by the Israeli news website Ynet to determine whom the general public considered the 200 Greatest Israelis.

Discuss this Yitzhak Navon biography with the community: