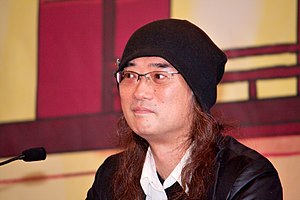 Who is Yutaka Izubuchi?

Yutaka Izubuchi is a Japanese anime designer and director. Izubuchi is credited for designing costumes, characters and creatures, but most of his designs are mechanical. He created and directed the RahXephon series and also created a manga story called Rune Masquer.

Among Izubuchi's design credits are the mecha from Panzer World Galient as well as some Gundam and Patlabor shows. He also created the Protect-Gear armor used in the Kerberos saga.

The ADV Films promotional materials for RahXephon and some reviews note that Gasaraki is an Izubuchi credit, but although he did mecha design on that show he was not responsible for writing or directing.

Izubuchi designed the costume for one of the characters of the Cutie Honey live action movie, directed by Hideaki Anno of Neon Genesis Evangelion fame; earlier, Anno and Izubuchi both had their mecha designs appear on Mobile Suit Gundam: Char's Counterattack.

Izubuchi did some additional design work for Tomoki Kyoda's Eureka Seven. Kyoda was an assistant director and episode director on RahXephon and directed its theatrical adaptation.

Discuss this Yutaka Izubuchi biography with the community: