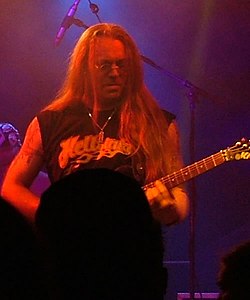 Who is Zachary Hietala?

Sakari "Zachary, Saku" Hietala is guitarist, co-songwriter and founding member of Finnish heavy metal band Tarot in early 80's, together with his younger brother Marco Hietala, who joined Nightwish in 2001. Zachary works as a youth instructor in his hometown, Kuopio, as well as teaching music theory to ninth and tenth grade students, and takes part in the management of the official Tarot website, responding to questions and comments made by fans on the forum. Zachary is friendly and fun loving.

Tarot has so far released eight studio albums, latest has been released in early 2010. The next year after, the band rerecorded The Spell of Iron with updated sound and few lyric changes. Zachary Hietala plays guitar in Marenne, and is one of the composers in the band's debut album that was released in February 2009.

Zachary married in 2006, to Nina. They have a cat and a potbelly pig.

Discuss this Zachary Hietala biography with the community: