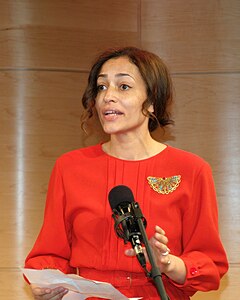 Who is Zadie Smith?

As of 2012, she has published four novels, all of which have received substantial critical praise. In 2003, she was included on Granta's list of 20 best young authors, and was also included in the 2013 list. She joined New York University's Creative Writing Program as a tenured professor on September 1, 2010. Smith has won the Orange Prize for Fiction in 2006 and her novel White Teeth was included in Time magazine's TIME 100 Best English-language Novels from 1923 to 2005 list.

Discuss this Zadie Smith biography with the community: