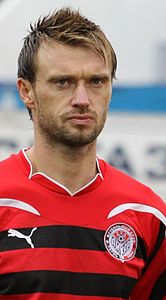 Zahari Sirakov is a Bulgarian footballer. He plays for FC Amkar Perm. Sirakov made a name for himself in Bulgaria while playing for Levski Sofia. On 24 September 1999, he scored a last-minute goal against Litex Lovech in a Bulgarian League match to bring the score to 1:1 in the heated derby encounter, prompting a brief pitch invasion by joyous Levski supporters. Sirakov was also notable for his sportsmanship, on one occasion shaking the hand of referee Atanas Uzunov after receiving a red card in a match against CSKA Sofia. He has remained popular with Bulgarian supporters even after starting his Russian adventures.

On the international front, Sirakov made his debut for Bulgaria against Poland on 6 September 1998, but received his second cap in 2007 during UEFA Euro 2008 qualifying. In August 2010, he earned a recall to the national side due to an injury suffered by Georgi Sarmov and on 11 August 2010, he came on as a substitute in the 0:1 away loss in a friendly match against Russia.

Discuss this Zahari Sirakov biography with the community: