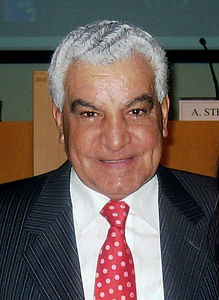 Who is Zahi Hawass?

Zahi Hawass is an Egyptian archaeologist, an Egyptologist, and former Minister of State for Antiquities Affairs. He has also worked at archaeological sites in the Nile Delta, the Western Desert, and the Upper Nile Valley.

Hawass has received widespread publicity internationally, and was the subject of a reality television series in the United States, Chasing Mummies. His views and links to business ventures and the Mubarak regime have engendered controversy. In connection with the awarding of a gift shop contract at the Egyptian Museum and alleged smuggling of antiquities, he was sentenced to a prison term, which was later lifted.

Discuss this Zahi Hawass biography with the community: