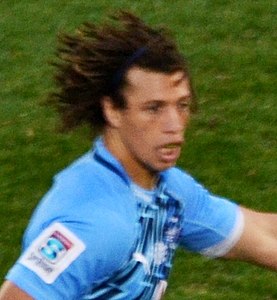 Who is Zane Kirchner?

Zane Kirchner is a South African international rugby union footballer who plays at fullback for the Bulls in Super Rugby and the Blue Bulls in the Currie Cup. Born in George, Western Cape, Kirchner attended PW Botha College in his home town, for whom he played at fly-half; he was first selected at fullback for the 2002 Craven Week. He began his provincial rugby career with the Griquas, and made more than 50 appearances for the side between his Currie Cup debut in 2003 and his move to the Blue Bulls in 2007. In five years with the Blue Bulls, Kirchner has made 64 Currie Cup appearances and scored 64 points. He made his debut for the Bulls franchise in 2008, and since then he has made a total of 81 appearances and scored 105 points.

In April 2013, it was announced that Kirchner will leave the Bulls to join Irish team Leinster on a two-year deal.

Discuss this Zane Kirchner biography with the community: