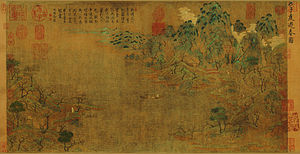 Who is Zhan Ziqian?

Zhan Ziqian was a famous painter of ancient China from Yangxin county, Shandong province. His birth and death dates are unknown. It is known that in the Sui dynasty he was appointed to the office of Chaosan Dafu and later of Zhangnei Dudu.

According to the historical documents, Zhan Ziquan painted a number of genres and religion paintings which have not survived. He was especially noted for his paintings of pavilions and people, and horses. His paintings of people were particularly lifelike. The only painting by him that survives today is Strolling About in Spring, which is a perspective arrangement of mountains.

Discuss this Zhan Ziqian biography with the community: