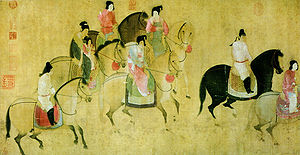 Who was Zhang Xuan?

Zhang Xuan was a Chinese painter who lived during the Tang Dynasty.

Zhang Xuan painted many pieces of art, one of his best-known paintings is Court Ladies Preparing Newly-Woven Silk, of which a single copy survives painted by Emperor Huizong of Song in the early 12th century. He also painted the Spring Outing of the Tang Court, which was later remade by Li Gonglin.

Discuss this Zhang Xuan biography with the community: