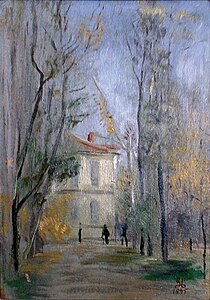 Zlatio Georgiev Boiadjiev was a Bulgarian painter. He is known for his portraits and landscapes, depicting mainly the Old Town of Plovdiv, Bulgaria's second largest city, and village life in the region.

Born in the village of Brezovo, Boiadjiev graduated in painting from the Academy of Fine Arts in Sofia in 1932. His work is generally divided into two main periods — until 1951, when he suffered a stroke and temporarily gave up painting, and from the time of his partial recovery a few years later until his death in 1976. After the stroke, he worked with his left hand and in a completely different manner.