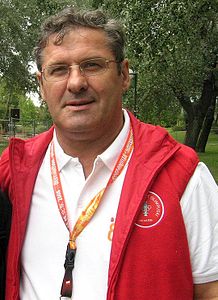 Zygmunt Józef Anczok is a former Polish footballer who played as a left-sided defender, who was an Olympic champion for Poland in the 1972 Summer Olympics.

His biggest success came in 1972 when he won the Polish cup as well as appearing in several Polish international matches. His international career began in 1965 when he played against Scotland. At the time of his arrival in the national game, a player of such speed and agility was practically unheard of in Poland, and he frequently was substituted into games to bring to his teams extra power in not just defense, but attack.

Anczok was given an opportunity in 1966 to go on a tour of South America, where he more than held his own against players such as Pelé. Numerous minor injuries gave him problems throughout the years to come, including in the 1974 FIFA World Cup. He continued to play in Norway in the late seventies, before retiring as a player in 1979 and heading into management. He originally managed in Poland before health problems forced him into relinquishing his duties.

Discuss this Zygmunt Anczok biography with the community: