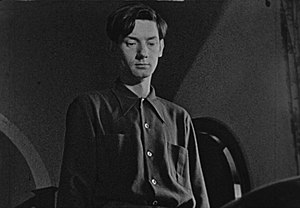 Alexander Hammid born Alexandr Hackenschmied was a leading photographer, film director, cinematographer and editor in Czechoslovakia between the two world wars. He immigrated to the U.S. in 1938 and became involved in American avant-garde cinema. He is best known known for his film, Crisis, Meshes of the Afternoon and To Be Alive!. He made Meshes of the Afternoon, with his wife Maya Deren—to whom he was married from 1942 to 1947.

He won the 1965 Academy Award for Best Documentary for To Be Alive!, which he co-directed with Francis Thompson.

Discuss this Alexandr Hackenschmied biography with the community: