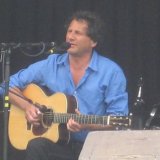 How He Got Here

Born and raised in the Philadelphia area, “as a kid I listened to rock ’n’ roll, my parent’s classical music collection and whatever else was on the radio,” says Kimbel. “I discovered the music of the Beatles, the Rolling Stones, Peter Paul and Mary, The Weavers and, through them, songs by Bob Dylan, Reverend Gary Davis and Robert Johnson, although I did not really know who they were by name.”

Kimbel began playing the guitar and piano when he was about 9 and by 11, was playing in a band. In his early teens, he got an electric guitar and started gigging at various functions in the Philadelphia area.

Andy later went to school to pursue a career in aviation and become a commercial pilot and flight instructor. It wasn’t until a pilot furlough at the early 90’s that Andy picked up the guitar, went out and played thinking that it would give him something to do until he got back into the cockpit. He would also frequent various clubs and coffeehouses watching and learning from performers like Garnet Rogers, Chris Smither, Tom Rush and Bill Morrissey. It was then that the call of the Philadelphia and New York blues and singer-songwriter scene grabbed Andy and brought him in as a performer at these same venues.

Over the past 25 years both solo and with a band, Kimbel has played Festivals, Special Events, Folk and Blues venues, Colleges, and has also been featured many times on Radio and Television shows. He keeps his audiences enticed with a great flow and versatility as his fingers move effortlessly across the neck of the guitar while singing and picking rhythm patterns and leads simultaneously improvising with his own compositions and a selection of traditional standards.

Andy also conducts Guitar Masters workshops in conjunction with some of his performances and presents school programs where aspiring musicians learn about various guitar techniques, songwriting and music production from this seasoned professional.

Discuss this Andy Kimbel biography with the community: