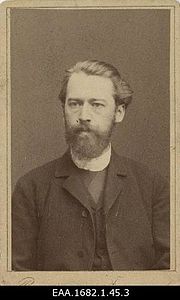 Who was Carl Gustav Axel Harnack?

He was the son of the theologian Theodosius Harnack and the twin brother of theologian Adolf von Harnack - all of them from Tartu, which in that time was known as Dorpat, in what is today Estonia. His father was a professor at the university of Tartu, and he studied also himself in the university. After his studies in Tartu, he moved to Erlangen to become a student of Felix Klein. He published his PhD thesis in 1875, and received the right to teach at the university of Leibzig the same year. One year later he accepted a position at Technical University Darmstadt. In 1877 he married Elisabeth von Öttingen, and they moved to Dresden, where he acquired professorship in the Polytechnikum, which becomes a technical university in 1890. Harnack suffered from health problems from 1882 onwards, forcing him to spend long times in a sanatorium.

Discuss this Carl Gustav Axel Harnack biography with the community: