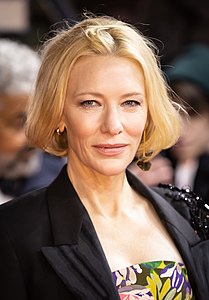 Who is Cate Blanchett?

Catherine Élise "Cate" Blanchett is an Australian actress of screen and stage. She has received critical acclaim and many accolades throughout her career, including two Academy Awards, three Screen Actors Guild Awards, three Golden Globe Awards and three BAFTA Awards.

Blanchett's other notable films include Peter Jackson's The Lord of the Rings trilogy, Veronica Guerin, Babel, Notes on a Scandal, I'm Not There, Indiana Jones and the Kingdom of the Crystal Skull, and The Curious Case of Benjamin Button.

Discuss this Cate Blanchett biography with the community: