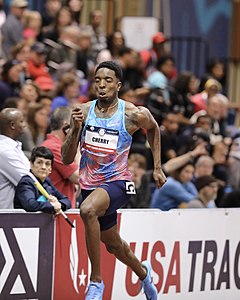 Who is D'Angelo Cherry?

D'Angelo Cherry is an American sprinter, who specialises in the 60 metres 100 and 200 meters. He graduated from Mississippi State University in 2012 of December .Cherry was recruited by steve dudley in atlanta,ga in 2008.

Cherry took part in the 2009 Pan American Junior Athletics Championships in Port-of-Spain, where he won a silver medal over 100 m in 10.17 seconds, only behind Marcus Rowland. He also helped the United States 4 x 100 metres relay squad to a gold medal.

Cherry has also set the record in the 2008 National Scholastic Indoor Championship in the 60 meter and also hold the fastest time ever ran for a high school athlete in the 55 meter dash. Cherry is also the Georgia state record holder in the 100 meters 4AAAA and holds the all-time record for ga.

Discuss this D'Angelo Cherry biography with the community: