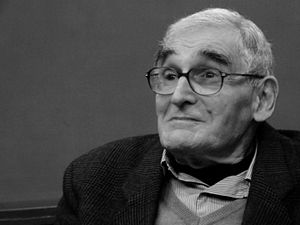 Who is Ernst W. Hamburger?

Ernst Wolfgang Hamburger is a German-born Brazilian physicist and popularizer of science.

Born in Germany in 1933, Prof. Hamburger emigrated with his parents to Brazil when he was still three years old. He studied physics at the University of São Paulo and joined its faculty soon after his graduation, in 1960. He is now a retired full professor of physics.

Prof. Hamburger is internationally known for his activities regarding public understanding of science. He is the director of Estação Ciência, an interactive science museum in São Paulo. He won the UNESCO Kalinga Prize for the Popularization of Science and the José Reis Award for the Divulgation of Science, the medal of the Brazilian Order of Scientific Merit, a member of the Brazilian Academy of Sciences.

Dr. Hamburger is married to Dr. Amélia I. Hamburger, also a physicist and colleague at the university. They have five children. One of them, Cao Hamburger, is a renowned film and TV director and scriptwriter.

Discuss this Ernst W. Hamburger biography with the community: