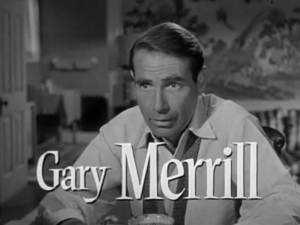 Who was Gary Merrill?

Gary Fred Merrill was an American film and television character actor whose credits included more than fifty feature films, a half-dozen mostly short-lived TV series, and dozens of television guest appearances. Merrill starred in All About Eve and married his co-star, Bette Davis.

Discuss this Gary Merrill biography with the community: