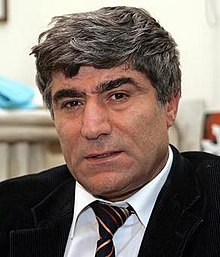 Who was Hrant Dink?

Hrant Dink was a Turkish-Armenian editor, journalist and columnist.

Hrant Dink was assassinated in Istanbul in January 2007, by Ogün Samast, a 17-year old Turkish nationalist. This was shortly after the premiere of the genocide documentary Screamers, in which he is interviewed about Turkish denial of the Armenian Genocide of 1915 and the case against him under Article 301. While Samast has since been taken into custody, photographs of the assassin flanked by smiling Turkish police and gendarmerie, posing with the killer side by side in front of the Turkish flag, have since surfaced. The photos created a scandal in Turkey, prompting a spate of investigations and the removal from office of those involved.

Discuss this Hrant Dink biography with the community: