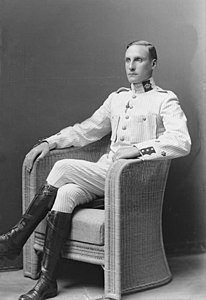 Who was Infante Alvaro, Duke of Galliera?

Prince Alvaro, succeeded to the title of Duke of Galliera on 14 July 1937. He died at the age of 87, making him the last surviving child of Infante Alfonso and Princess Beatrice, as well the last surviving grandchild of Prince Alfred and Grand Duchess Maria Alexandrovna.

As his son Alonso died in 1975 at the age of 34, his grandson Alfonso inherited the Dukedom of Galliera

Discuss this Infante Alvaro, Duke of Galliera biography with the community: