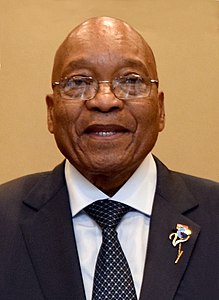 Who is Jacob Zuma?

Jacob Gedleyihlekisa Zuma, GCB is the President of South Africa, elected by parliament following his party's victory in the 2009 general election. He was reelected in the 2014 election.

Zuma is the President of the African National Congress, the governing political party, and was Deputy President of South Africa from 1999 to 2005. Zuma is also referred to by his initials JZ and his clan name Msholozi. Zuma became the President of the ANC on 18 December 2007 after defeating incumbent Thabo Mbeki at the ANC conference in Polokwane. He was re-elected as ANC leader at the ANC conference in Manguang on 18 December 2012, defeating challenger Kgalema Motlanthe by a large majority. Zuma was also a member of the South African Communist Party, briefly serving on the party's Politburo until he left the party in 1990. On 20 September 2008, Thabo Mbeki announced his resignation after being recalled by the African National Congress's National Executive Committee. The recall came after South African High Court Judge Christopher Nicholson ruled that Mbeki had improperly interfered with the operations of the National Prosecuting Authority, including the prosecution of Jacob Zuma for corruption.

Discuss this Jacob Zuma biography with the community: