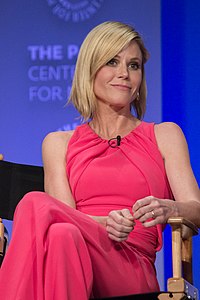 Who is Julie Bowen?

Julie Bowen Luetkemeyer, better known by her stage name Julie Bowen, is an American actress. She is best known for playing Carol Vessey on Ed, Denise Bauer on Boston Legal, Sarah Shephard on Lost and Claire Dunphy on the sitcom Modern Family. The latter earned her four nominations for the Primetime Emmy Award for Outstanding Supporting Actress in a Comedy Series, winning in 2011 and 2012.

Bowen has also appeared in films such as Happy Gilmore, Multiplicity, Venus and Mars, Joe Somebody, Kids in America, Sex and Death 101, Crazy on the Outside, Jumping the Broom, and Horrible Bosses.

Discuss this Julie Bowen biography with the community: