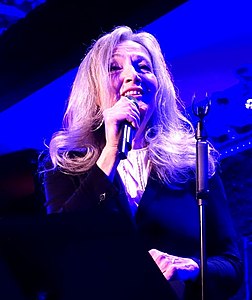 Who is Karla DeVito?

Karla DeVito is an American singer, actress and voice artist.

DeVito and her three brothers were raised by their mother Vivienne, who, when not working to support the family, was often singing at home. Karla attended Willow Crest Grade School in Mokena, where she was a cheerleader.

Karla attended Lincoln-Way High School in New Lenox, Illinois. In her senior year, Karla appeared in the high school's production of "Brigadoon" and "The Odd Couple". She was also runner-up to the Homecoming Queen.

At Loyola University Chicago, she majored in theatre. During her freshman year, she joined the Chicago cast of "Godspell." In 1971-72 Karla studied with Jo Forsberg at Second City Company in Chicago and was part of the Second City Children's Theatre group, with Bill Murray and many other improvisational actors. In 1973, she was in the cast of the popular play Hair.

She subsequently sang with Meat Loaf, on the Bat out of Hell tour. Karla then contributed background vocals for such groups as Blue Öyster Cult and the Sorrows. Later she became a solo performer in her own right and opened for such prominent artists as Hall & Oates and Rick Springfield, as well as headlining solo concerts at New York's The Bottom Line.

Discuss this Karla DeVito biography with the community: