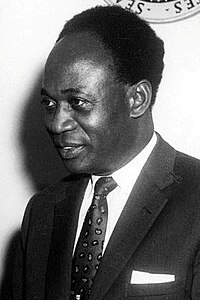 Who was Kwame Nkrumah?

Kwame Nkrumah, P.C. was the leader of Ghana and its predecessor state, the Gold Coast, from 1951 to 1966. Overseeing the nation's independence from British colonization in 1957, Nkrumah was the first President of Ghana and the first Prime Minister of Ghana. An influential 20th-century advocate of Pan-Africanism, he was a founding member of the Organisation of African Unity and was the winner of the Lenin Peace Prize in 1963. He saw himself as an African Lenin.

Discuss this Kwame Nkrumah biography with the community: