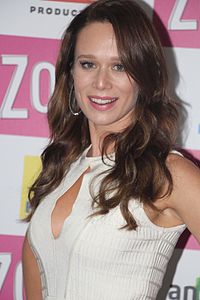 Who is Mariana Ximenes?

She began her career with only 6 years in a school play, playing the character Cinderella fairy tale. After this, she fell in love for the profession, is increasingly interested in participating in theater, and always emphasizing the beauty. His first novel was 13 years old, doing a quick participation in the telenovela 74.5 - Uma Onda no Ar the defunct Rede Manchete, produced in 1994. However, the breakthrough role came four years after the telenovela in Fascinação 1998, where did the character Emília. During this same year, he starred in his first film in theaters, the Caminho dos Sonhos with the character Ruth Stern.

His first successful role was in 2000, in the soap Uga-Uga, making the character Bionda, who earned fame and harassment of the public for the actress. Soon after, in 2001, made her first job as a voice actor, doing the voice of the character Sharon Spitz Brazilian dubbing for the animated series Canadian Braceface. In the same year, Isabel played the character in the soap opera of success A Padroeira.

Discuss this Mariana Ximenes biography with the community: