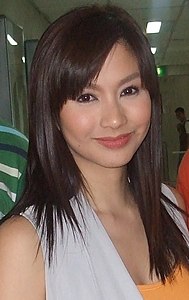 Who is Mariel Rodriguez?

Mariel Rodriguez-Padilla is a Filipina commercial model, endorser, TV host, former MTV VJ and actress. She first started as an MTV VJ. She used to co-host the noontime variety show Happy Yipee Yehey!. During its run, she has also been a host for the reality franchise Pinoy Big Brother and the now defunct noontime show Wowowee.

Starting her career as a model for Clean&Clear facials and became a VJ on MTV Pilipinas, she was brought in by GMA-7. Later she moved to station ABS-CBN Network to host the noon-time program Wowowee and Pinoy Big Brother. On September 2011, she resigned on ABS-CBN and moved to TV5.

Other than hosting jobs on TV, Rodriguez-Padilla acted in the Bud Brothers Series played as Betsey, Varga series and several films.

Discuss this Mariel Rodriguez biography with the community: