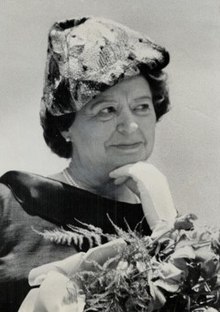 Who was Maryon Pearson?

Maryon Elspeth Pearson was the wife of Lester Bowles Pearson, the 14th Prime Minister of Canada.

Maryon and Lester Pearson married on August 22, 1925. They met at the University of Toronto, where he was a teacher and she was a student.

Maryon Pearson was also known for her sharp tongued wit. John English in his biography, Shadow of Heaven: The Life of Lester Pearson, devoted a full chapter to the subject of Mrs. Pearson's prickly personality. Among her most famous quotations:

⁕"Behind every successful man, there stands a surprised woman."

⁕[On the retired former prime minister's greater time at home]: "I married him for better or worse. I didn't marry him for lunch."

⁕[On being asked during an election campaign by a reporter, "Is there anything you'd like to bring up, Mrs. Pearson?"] "Yes, three doughnuts and six cups of coffee."

⁕"We lost everything. We even won our own constituency."

⁕"The big problem is to find suitable hats. I don't care for them all that much, but you have to wear them in politics."

It was reportedly also at Maryon Pearson's behest that the practice of curtseying to the Governor General and his consort was discontinued — apparently because Pearson refused to act deferentially toward her old friend Norah Michener.

Discuss this Maryon Pearson biography with the community: