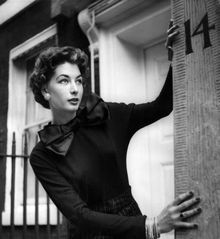 Who was Maxime de la Falaise?

Maxime de la Falaise was a 1950s model, and, in the 1960s, an underground movie actress. She is also remembered as a cookery writer and "food maven" and a fashion designer for Blousecraft, Chloé and Gérard Pipart. In her later years she pursued a career as a furniture and interior designer.

Discuss this Maxime de la Falaise biography with the community: