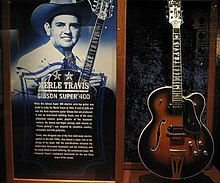 Who was Merle Travis?

Merle Robert Travis was an American country and Western singer, songwriter, and musician born in Rosewood, Kentucky. His lyrics often discussed the life and exploitation of coal miners. Among his many well-known songs are "Sixteen Tons", "Re-Enlistment Blues" and "Dark as a Dungeon". However, it is his masterly guitar playing and his interpretations of the rich musical traditions of his native Muhlenberg County, Kentucky for which he is best known today. "Travis picking", a syncopated style of finger picking, is named after him. He was inducted into the Nashville Songwriters Hall of Fame in 1970 and elected to the Country Music Hall of Fame in 1977.

Discuss this Merle Travis biography with the community: