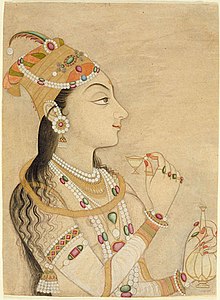 Who was Nur Jahan?

Nur Jahan born as Mehr-un-Nissa, was Empress of the Mughal Empire as the chief consort of Emperor Jahangir. A strong, charismatic and well-educated woman, she is considered to be one of the most powerful and influential women of the 17th century Mughal Empire. She was the twentieth and favourite wife of the Emperor Jahangir who ruled the Mughal Empire at the peak of its power and supremacy. The story of the couple’s infatuation for each other and the relationship that developed between them has been the stuff of many legends.

As a result of her second husband’s, the Emperor Jahangir's, serious battle with alcohol and opium addiction, Nur Jahan was able to wield a significant amount of imperial influence and was often considered at the time to be the real power behind the throne. She remains historically significant for not only the sheer political power she maintained but also for her contribution to Indian culture, charity work, commercial trade and her ability to rule with an iron fist. She was the aunt of the Empress Mumtaz Mahal for whom the future Emperor Shah Jahan built the Taj Mahal. Furthermore she is the only Mughal empress to have her name struck in silver coins.

Discuss this Nur Jahan biography with the community: