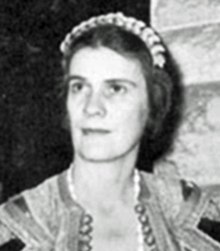 Who was Olgivanna Lloyd Wright?

Olgivanna Lloyd Wright was the third and final wife of Frank Lloyd Wright and had significant influence in his life and work, due in part to her extensive Theosophical associations. She was a Serb Montenegrin dancer. While her "language, cultural background and upbringing were almost exotically alien to his own," she was critical in introducing Wright to Greek-Armenian mystic G. I. Gurdjieff, a man whom he alternately despised and admired. She is a principal character in T.C. Boyle's 2009 novel, The Women.

Discuss this Olgivanna Lloyd Wright biography with the community: