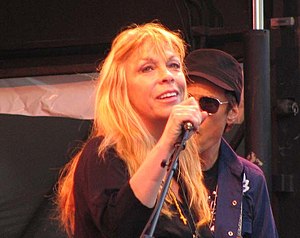 Who is Rickie Lee Jones?

Rickie Lee Jones is an American vocalist, musician, songwriter and producer. Over the course of a career of over three decades, Jones has recorded in various musical styles including rock, R&B, blues, pop, soul, and jazz standards. Her songwriting has been characterized as "a blend of bravado and vulnerability [that] wavers on indefinable borders." She is also known for her unique singing style, especially in live performances. One concert reviewer, describing her rendering of "We Belong Together," states she "reached her apex, skating from swells into near screams into breathy whispers, from pointillist staccato scats into brassy, trumpetlike bursts."

Discuss this Rickie Lee Jones biography with the community: