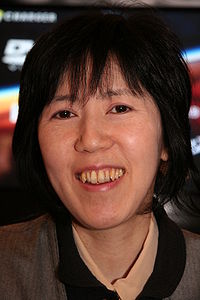 Who is Sachiko Kamimura?

Sachiko Kamimura is a Japanese animator. She is noted for her work with Sunrise, where she was the supervising animator and character designer for the City Hunter series and several others, mentoring future several Sunrise character designers and animators, including Toshihiro Kawamoto.

Prior to working at Sunrise, she previously worked at Toei Animation and Walt Disney Animation Japan. She worked as general supervising animator and character designer when the Tezuka Production Company Ltd. made the Black Jack into a TV series.

Sachiko adapted characters and artwork for the The Heroic Legend of Arslan anime and designed them for the Brain Lord video game, as well as producing illustrations for many Japanese novels.

Kamimura's artbooks are rare and sought-after by Anime Otaku.

Discuss this Sachiko Kamimura biography with the community: