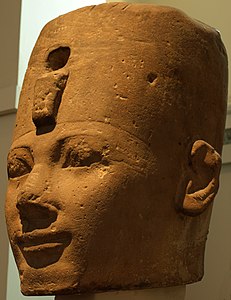 Who was Thutmose I?

Thutmose I was the third Pharaoh of the 18th dynasty of Egypt. He was given the throne after the death of the previous king Amenhotep I. During his reign, he campaigned deep into the Levant and Nubia, pushing the borders of Egypt further than ever before. He also built many temples in Egypt and built a tomb for himself in the Valley of the Kings; he is the first king confirmed to have done this. He was succeeded by his son Thutmose II, who in turn was succeeded by Thutmose II's sister, Hatshepsut. His reign is generally dated from 1506 to 1493 BC, but a minority of scholars, who feel that astrological observations used to calculate the timeline of ancient Egyptian records and thus the reign of Thutmose I, were taken from the city of Memphis rather than from Thebes, would date his reign from 1526 BC to 1513 BC.

Discuss this Thutmose I biography with the community: