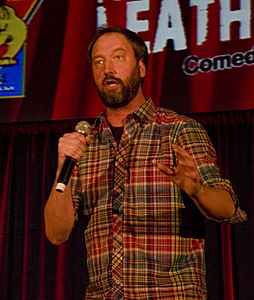 Who is Tom Green?

Michael Thomas "Tom" Green is a Canadian actor, rapper, writer, comedian, producer, director, talk show host, and media personality. Best known for his unique brand of comedy, Green found mainstream prominence via his MTV television show The Tom Green Show. Green was also in the public eye for his short-lived marriage to actress Drew Barrymore, and for his roles in such films as Freddy Got Fingered, Road Trip, Stealing Harvard and Charlie's Angels. Green is also a testicular cancer survivor.

In June 2003, Green served as a guest-host on Late Show with David Letterman which led to him hosting his own late-night talk show on MTV entitled The New Tom Green Show. From 2006–2011, he hosted his internet talk show Tom Green's House Tonight from his living room and, as of January 2010, has started performing stand-up comedy. As of October 2013, Green is the host of the live weekly talk-show Tom Green Live on AXS TV.

Discuss this Tom Green biography with the community: