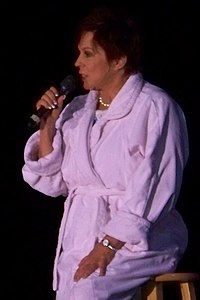 Who is Vicki Lawrence?

Victoria Ann "Vicki" Lawrence is an American actress, comedienne, and singer. She is best known for her co-starring role on The Carol Burnett Show, alongside her mentor Carol Burnett, from 1967 to 1978, and as the explosively quick-tempered, abrasive-mannered, and smart-aleck Thelma Harper/Mama.

As a singer she recorded "The Night the Lights Went Out in Georgia" that made #1 on the US chart as well as in Canada. She is credited with co-authoring two books.

She has multiple Emmy awards nomination, winning one in 1976. she is also a multi golden Globe nominatee all for The Carol Burnett Show

She has made multiple appearances in Television shows such as Laverne and Shirley, The Love Boat, Murder She Wrote, Roseanne, Diagnosis Murder and with friend and co-Star Tim Conway in Yes, Dear. Most recently played Mamwa in Hannah Montana

Discuss this Vicki Lawrence biography with the community: